In my introductory post for this blog, I promised some behind-the-scenes trivia from the Anatomy & Physiology textbook—and I realize I have yet to deliver on that promise. So, with actual Easter eggs still fresh on our minds, I thought I'd reveal a few bits of the "hidden information" that gamers like to call easter eggs.

This round (yes, I'm implying more in the future) features a few visual easter eggs. 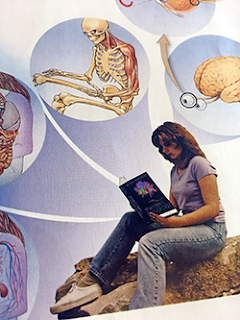 First up is that illustration in the Big Picture section that introduces the Anatomy & Physiology textbook, It's on page 2, facing the opening page of Chapter 1. The woman in the central photo of that illustration is my wife, Jenny.

Early editions of Anatomy & Physiology used a different model, but we needed to update the photo for a planned rearrangement of its elements. So Jenny and I went out to our college's Lake Patton (that's what I call it, anyway), and Jenny posed on a boulder in the same position as the original model (who was sitting on stairs). She wore clothing of similar color and style to the drawn art components, and held a book the same way.

Although we have reconfigured that Big Picture illustration a few times since then, we're still using Jenny's picture. For each edition, our production team replaces the cover within the photo with a cover to match that edition. 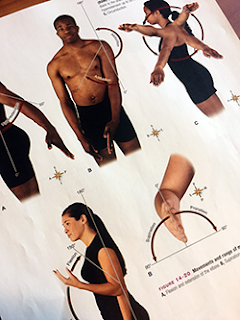 The ninth edition of Anatomy & Physiology features a whole new set of photos that depict different types of body movements, such flexion, extension, circumduction, etc. Most of them appear in Chapter 14 (Articulations).

Before I tell the story of the new photos, I'd like to mention that I had some hesitation in replacing some of the older photos. I had some ideas for a new approach, so I finally made the leap to a new set of photos with a consistent presentation. But a few of the older images were from a way-back photo with my co-author Gary Thibodeau, featuring his two kids, Doug and Beth, who were teens at the time. Although I hated to lose that "family connection," I think the new images work really well for teaching, too.

The new series was shot at a huge photo studio in St. Louis, just down the street from my old high school. I live near St. Louis and my editors are all based at the St. Louis offices of Elsevier Publishing. It was an amazing experience. The advanced equipment, advanced facilities, and skilled photographers and professional models, all made the several days of shooting seem more like fun than work. Before that day, I didn't even know there was such a thing as a "foot model," so it was a great learning experience, too!

All those photos were shot in front of a gigantic green backdrop that curved forward to cover the floor. After choosing our final selections of each photo, the photographer digitally replaced the green background with a transparent background. By doing so, each model appears to have the page itself as a background—and the text can be easily wrapped around some of the images without being distracting. I also like the "clean" look of photos with no apparent background. 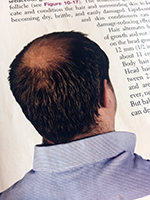 Figure 10-19 is another photo from the multi-day photo shoot I just mentioned. We wanted a new shot of male pattern baldness and we hadn't hired a model for just for that shot.

In fact, this shot wasn't even on our planned list of new photos. But when it came up, a photographer said, "just a minute!" and picked up his camera as he ran off to a suite of offices down the hall. He came back with a smile and great photo of a colleague from an office down the hall. 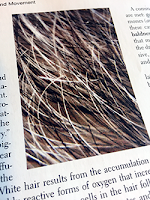 On the same page (196), that photo of the mix of black and white hairs that make up a typical head of gray hair is a shot of my head. When I was working on revising this chapter in a previous edition, I grabbed a digital camera and handed it to my wife, Jenny, and asked her to take a close up of hairs on my temple. I'm thinking of using this on the "about the author" page in the next edition. 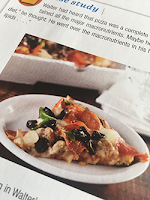 Getting back to that amazing photo shoot in St. Louis, there is one more photo I want to mention. It's a shot of a slice of pizza used in a Case Study on page 961, near the end of Chapter 41 (Nutrition and Metabolism). It was nearing lunch time on the first shooting day, and an astute photographer brought up the "pizza shot" we had on our planning list. He suggested ordering a pizza from a nearby pizzeria that had very photogenic pizza that also happened to taste amazing.

Although it wasn't the thin-crust St. Louis style pizza that had originated in that very neighborhood, I have to say it really was amazing. And photogenic. And it really was that loaded with toppings (no trickery, truly!).

Wow, here I am at the end of a too-long blog post and I haven't even covered the tip of the iceberg. So I'll have to make this a recurring series of behind-the-scenes trivia, gossip, and St. Louis food recommendations. Be sure to subscribe, so you don't miss it! 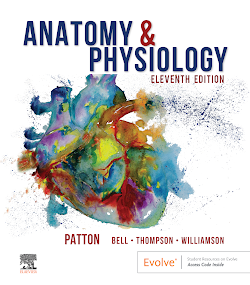