Teaching thousands of anatomy and physiology students over the decades has taught me that a major hurdle is being able to see the "big picture" of the structure and function of the human body.

Because the A&P course necessarily includes a nearly overwhelming collection of detailed, technical facts expressed in a language that is foreign to many beginning students, they become so focused on each bit of information that they have hard time putting it all together into a coherent conceptual framework.

One approach would be to present a concept map—or some type of graphic representation—of all the core concepts of each body system.  For example, a graphic showing how the system explored in a particular chapter ties into the structure and function of all the other systems of the body.

I think a graphic approach can be very useful, but I wonder if that strategy isn't better used as an active learning exercise in which each learner creates their own concept map—perhaps after some of the initial learning of a topic has already taken place.  Or, even better, make it a collaborative study project among a group of peers.

I think a better approach in a textbook with limited page space is to build a "big picture" perspective into the narrative of the story.  So that's why in Anatomy & Physiology we have included a highlighted section at the end of each chapter that briefly pulls the reader back from the details of the chapter and widens the focus to take in a bigger, more global perspective.

Called The Big Picture, this feature does several things: 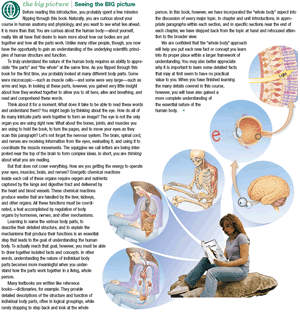 To get the reader's attention, a one-page introduction called Seeing The Big Picture faces the first page of Chapter 1 of Anatomy & Physiology.  This feature grabs the readers attention immediately and sets them along their path already looking for the big picture.  It encourages students to think about relationships as they read—but also tells them to look for The Big Picture at the end of each chapter to help them "get" the big ideas of the chapter.

We have given a lot of thought to which strategy works best to help readers understand whole-body relationships. We are certain that the tried-and-tested summary narrative The Big Picture works well in stimulating critical thinking and construction of a solid conceptual framework than a pre-constructed chart that may short-circuit the learning process in a learner's mind. 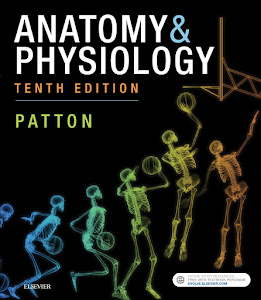